Need another reason to visit Puerto Vallarta this October? Do you just want something else to add to your activity list while you’re already there? How about the watching part of the 16th Pan American Games live?
The Pan American games are second only in size and stature to the Summer Olympic Games. They are only held every four years and the year prior to the Olympic games. The 46-sport alphabet of events goes from archery to wrestling.

You heard me…I love it! Since we moved to Puerto Vallarta almost a year ago, we have heard nothing but how horrible rainy season can be. Of course, this mostly comes from locals who have been here a long time and who thrive on the warm, much less humid, winters here. Don’t get me wrong, the winters here are truly superb. But rainy season may be my favorite time of year. Here’s why:

SUNNY DURING THE DAY, RAINY AT NIGHT- That’s how it happens 99% of the time. It is extremely rare for it to rain all day every day, especially for a few days at a time. Instead, it’s actually blue skies and sunshine during the day. You would never even know that it’s rainy season until late afternoon. That’s when the clouds roll in. Which leads me to…

SUNSETS- In the summer, the sunsets are stunning. The clouds roll in just in time to create a heavenly tropical sky. Picture your favorite sunset postcard photo and that’s what it looks like every day. You are also more likely to see the infamous ‘green flash’ during the rainy season, or so they say.

THUNDERSTORMS- If you like thunderstorms, there is no better place. Once the sun sets and you’re settling in for your evening cocktail, you can catch a spectacular thunderstorm almost every night. You know how you see the lightning, then count the seconds until the thunder? Well, it’s not uncommon for the lightning and thunder to occur simultaneously here. The sound is almost deafening!

SLEEPING IN THE RAIN- When I was a kid, we used to sit in the screened porch at my grandmother’s house, listening to the raindrops hit the tin roof. Maybe I’m just nostalgic, but there’s something about the sound of rain at night. Now, there are a lot of times when the thunderstorms go on into the wee hours, but usually it’s just the rain that continues on through the night. And, MAN, can it rain here!

IT’S SO GREEN- Puerto Vallarta is beautiful all year round, but during rainy season, the colors from the mountainside and the flowers are so vibrant they just pop! The colors are so brilliant that they almost seem fake.

WARM WATER- If you’re like me, and most women are, the ocean is there just to cool off after lying in the sun too long. The only time I go further than just sticking my toes in the water is when I’m hot. In the winter, I don’t get very far because the water is so cold! In the summer, the water is so warm I never want to get out. I could float around and play in the waves for hours.

HAVING THE TOWN TO YOURSELF- Rainy season tends to discourage tourists from visiting this time of year. Clearly, the businesses would love to see the streets full 365 days a year. The truth is it isn’t very busy in the summer, so the beaches, the shops, the restaurants, and the bars are pretty quiet. If you think you like Vallarta during the height of tourist season, just imagine having it all to yourself.

So, the next time you’re considering a trip to a tropical destination like Puerto Vallarta, don’t let the words rainy season dampen your spirits (pun intended). You will be pleasantly surprised. 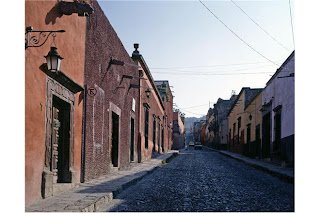 A quick flight from Mexico City to Leon or Queretaro, followed by a 1.5 hour drive through small towns and beautiful countryside, you know that you’ve arrived in heaven when you hit the cobblestone streets of San Miguel de Allende.

It’s been a little over a year and I’m itching to be back in the mountains of Mexico. At 90+ degrees, it’s no wonder that I’m craving an escape from Salt Lake City to the temperate climate of San Miguel. When you think of Mexico, you probably think of a wintertime escape to the beach. But, that’s not nearly all that this diverse country has to offer. San Miguel, widely known as a refuge for American expats, is a small town in the middle of Mexico, boasting an expansive population of artists and thinkers from around the world. The colonial and peaceful charm of San Miguel proves an ideal environment for inspiration and relaxation alike. It’s for this reason that so many people have chosen to build beautiful homes and retreats within its borders.

Most of my time in town is spent out and about, admiring the enchanting villas that I’m lucky enough to represent as a part of Mexican Destinations. If you get the opportunity, be sure to participate in the Home and Garden tour offered by the historical society. It’s the most curious thing: these cobblestone roads, you will see, are interspersed with quaint antique shops, restaurants, churches. But, between them all, walls with doors: some ordinary doors, some ornate. It’s anyone’s guess what lies beyond. Trust me, it’s worth further exploration. The Home and Garden tours will provide entrance to these otherwise inaccessible properties. Behind these walls, you will find the most unexpected elegance. Often, the doors open to extravagant gardens and some of the most original, luxurious homes that you have ever seen. Though the culture and history of colonial Mexico are preserved, each home has its own unique style and appeal. Additionally, you can actually rent these homes through Mexican Destinations and experience what it’s like to live the fairytale life that lies “behind the walls.”

Other “must do” activities: take an art class- everything from pottery to painting is available. Hit the links- San Miguel offers some of the best golf in Mexico. Go Antiquing and bring some extra luggage for the trip home- you can thank me later. Eat delicious, authentic cuisine at La Posadita. Or, just relax in your own private garden with a good book and a margarita, taking in the peace that is San Miguel de Allende.
Posted by Mexican Destinations at 1:44 PM No comments: