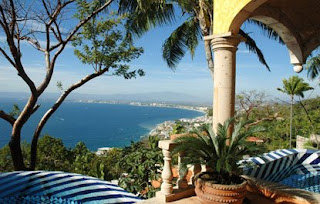 This spectacular new luxury rental in Puerto Vallarta, Mexico boasts a state-of-the-art infinity swimming pool and over 8,000 square feet of living space in this villa near Puerto Vallarta . Striking antiques and hand-painted murals grace every room. Located on a cliff at the top of Real de Conchas Chinas, the panoramic ocean, city and mountain views are unrivaled and will take your breath away.

If you are looking for the very best in accommodations, Hacienda de los Santos is for you. The stunning architecture reflects the traditions of Old Mexico, while affording guests every possible modern convenience and amenity. You'll be pampered in this custom-designed and meticulously built home. It contains extensive cantera columns and railings, bold arches, matte tikul flooring, vaulted bóveda veilings and cupolas throughout the entire home.

Linda Ellerbee (born August 15, 1944) is an American journalist who is most known for several jobs at NBC News, including Washington (DC) correspondent, host of the Nickelodeon network's Nick News, and reporter and co-anchor of NBC News Overnight, which was recognized by the jurors of the duPont Columbia Awards as "possibly the best written and most intelligent news program ever."[1]
One Journalist's View
By Linda Ellerbee

Sometimes I've been called a maverick because I don't always agree with my colleagues, but then, only dead fish swim with the stream all the time. The stream here is Mexico. You would have to be living on another planet to avoid hearing how dangerous Mexico has become, and, yes, it's true drug wars have escalated violence in Mexico , causing collateral damage, a phrase I hate. Collateral damage is a cheap way of saying that innocent people, some of them tourists, have been robbed, hurt or killed.

But that's not the whole story. Neither is this. This is my story.

I'm a journalist who lives in New York City , but has spent considerable time in Mexico , specifically Puerto Vallarta , for the last four years. I'm in Vallarta now. And despite what I'm getting from the U.S. media, the 24-hour news networks in particular, I feel as safe here as I do at home in New York , possibly safer. I walk the streets of my Vallarta neighborhood alone day or night. And I don't live in a gated community, or any other All-Gringo neighborhood. I live in Mexico .. Among Mexicans. I go where I want (which does not happen to include bars where prostitution and drugs are the basic products), and take no more precautions than I would at home in New York ; which is to say I don't wave money around, I don't act the Ugly American, I do keep my eyes open, I'm aware of my surroundings, and I try not to behave like a fool.

I've not always been successful at that last one. One evening a friend left the house I was renting in Vallarta at that time, and, unbeknownst to me, did not slam the automatically-locking door on her way out. Sure enough, less than an hour later a stranger did come into my house. A burglar? Robber? Kidnapper? Killer? Drug lord?

No, it was a local police officer, the "beat cop" for our neighborhood, who, on seeing my unlatched door, entered to make sure
everything (including me) was okay. He insisted on walking with me around the house, opening closets, looking behind doors and, yes, even under beds, to be certain no one else had wandered in, and that nothing was missing. He was polite, smart and kind, but before he left, he lectured me on having not checked to see that my friend had locked the door behind her. In other words, he told me to use my common sense. Do bad things happen here? Of course they do. Bad things happen everywhere, but the murder rate here is much lower than, say, New Orleans , and if there are bars on many of the ground floor windows of houses here, well, the same is true where I live, in Greenwich Village, which is considered a swell neighborhood - house prices start at about $4 million (including the bars on the ground floor windows). There are good reasons thousands of people from the United States are moving to Mexico every month, and it's not just the lower cost of living, a hefty tax break and less snow to shovel.. Mexico is a beautiful country, a special place. The climate varies, but is plentifully mild, the culture is ancient and revered, the young are loved unconditionally, the old are respected, and I have yet to hear anyone mention Britney Spears, Lindsay Lohan, or Madonna's attempt to adopt a second African child, even though, with such a late start, she cannot possibly begin to keep up with Anglelina Jolie.
And then there are the people. Generalization is risky, but- in general - Mexicans are warm, friendly, generous and welcoming. If you
smile at them, they smile back. If you greet a passing stranger on the street, they greet you back. If you try to speak even a little Spanish, they tend to treat you as though you were fluent. Or at least not an idiot. I have had taxi drivers track me down after leaving my wallet or cell phone in their cab. I have had someone run out of a store to catch me because I have overpaid by twenty cents. I have been introduced to and come to love a people who celebrate a day dedicated to the dead as a recognition of the cycles of birth and death and birth - and the 15th birthday of a girl, an important rite in becoming a woman - with the same joy.
Too much of the noise you're hearing about how dangerous it is to come to Mexico is just that - noise. But the media love noise, and too many journalists currently making it don't live here. Some have never even been here. They just like to be photographed at night, standing near a spotlighted border crossing, pointing across the line to some imaginary country from hell. It looks good on TV.

Another thing. The U.S. media tend to lump all of Mexico into one big bad bowl. Talking about drug violence in Mexico without naming a state or city where this is taking place is rather like looking at the horror of Katrina and saying, "Damn. Did you know the U.S. is under water?" or reporting on the shootings at Columbine or the bombing of the Federal building in Oklahoma City by saying that kids all over the U.S. are shooting their classmates and all the grownups are blowing up buildings. The recent rise in violence in Mexico has mostly occurred in a few states, and especially along the border. It is real, but it does not describe an entire country.

So come on down and get to know your southern neighbors. I think you'll like it here. Especially the people.
Posted by Mexican Destinations at 10:20 AM No comments: